16. Who is reading shōjo manga?

To continue somewhat from last week’s consideration of Yoshizaki Seimu’s Kingyoya koshoten and the idea that the people who read comics aren’t always what you think they are, I want to think somewhat broadly about shōjo manga and whether, as a demographically oriented comic type, it should be meaningfully construed as “for girls.”  I have already written about why one should be suspicious of demographic categories and whether they truly point to a hypothesized reader, but it’s worth considering things from the flip side, because in my earlier argument I demonstrated that shōnen manga functioned historically as a kind of generic category.  That still leaves the possibility that shōjo manga is representative of a meaningfully targeted demographic.

There are critics who believe that shōjo manga is something of a cloistered world “for girls” with special codes, modes of address, and visualization tailored to what came to be called shōjo bunka or “girl’s culture.”  As Takahashi Mizuki has noted: 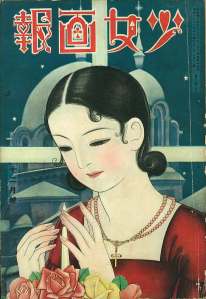 An early cover of Shōjo gahō

“This subculture first emerged in the early twentieth century when literary magazines developed distinctive modes of storytelling and art styles that appealed to girl readers.  In the postwar period, these magazines shifted from a text-based to a manga format, but the aesthetic style that marked them as ‘authentically’ speaking to a girl audience remained.  The contemporary genre of shōjo manga is inextricably linked to the subculture of the girls and young women who both produce and consume it.” (“Opening the Closed World of Shōjo Manga” in Japanese Visual Culture p. 114)

Takahashi goes on to note that while originally shōjo manga was produced largely by men, over time shōjo mangaka became overwhelmingly female and its production the affair of women writing for their peers and for young girls.  Takahashi does demonstrate quite convincingly that some of shōjo manga’s stereotypical visual codes come from an earlier tradition of illustrating fashion and contemporary modes of dress.  So, for instance, to turn the page and suddenly see a character dressed to the nines and the details of his/her garments meticulously rendered would hark back to, say, the cover of girl’s magazines with their full color illustrations of what girls and young women were wearing “those days.”

That said, Takahashi’s argument has a bit of a chicken and the egg problem: does shōjo manga cater to a pre-existing girl audience with already well established patterns of behavior and material consumption, or is shōjo manga in fact one means by which a particular image of girls is disseminated and enforced, thus creating the very audience that from one perspective it might otherwise seem merely to cater to?  Honda Masuko certainly argues this point in her Jogakusei no keifu (Origin of the “Girl Student”), so it seems to be an open question rather than a settled matter.

For my purposes here, I would like to frame the question somewhat differently: can one, simply by reading a text, discern who its hypothetical reader ought to be?  How might we go about this?  My approach today will be to consider manga that themselves read shōjo manga.  Now, this may seem like a rather odd strategy, but I hasten to remind you, dear reader, that the “peculiar” codes of shōjo manga became codified at a time for which there is frightfully little of the kind of data that a more sociologically oriented approach might look for.  Moreover, it is entirely possible that methods deployed on contemporary audiences (e.g. surveys) might grossly mislead due in no small part to preconditioning assumptions upon which we rely, even though they really ought to be challenged.

“What kind of person reads this?”

I guess the readers of Sulaco are more conservative / My manga is “too cool” / I just don’t get it… / …what kind of person reads this?

I want to take you back to a personal favorite of mine, Matsuda Naoko’s Shōjo manga (that’s the title), and our intrepid mangaka, Tawara An, who, having been rebuffed by her publisher in this first story (about a young office worker), wonders whether she’ll ever be able to create work that sells, meaning, as per above, either that it “genuinely appeals to a girl audience” or “is consistent with certain stereotypes of a girl audience generated by popular media.” (NB – I’m largely for the latter)  Fast forward a few chapters, and Tawara has sold her first paperback volume, and she is high as a kite.  However, later, at a get together with other manga artists, she gets into a fight with what I believe sociologists call the “ignorant douchebag,” after discovering that she has been paid far less than what is typical for other, “non-girl” manga demographics.

Tawara: You little shit… have you ever read any shōjo manga?

Douchebag: No… I haven’t… b-but I’ve seen some anime…

Tawara: Is anime manga?  Why don’t you try reading some, even a few, before shooting off your mouth!

DB: But shōjo manga are so low grade [reberu ga hikukute] I can’t read that!

Tawara: There’s crappy work in every genre! / Take it from me, a shōjo mangaka / some manga in seinen magazines have clumsy depictions of characters’ psychology and they read more like “sketches”–it’s so tedious!!

Another seinen manga artist present points out that if shōjo manga were truly interesting, then men would read it too (more on that below).  Furthermore, he points out that women read manga for boys and young men, while the converse doesn’t seem to be the case.  His female colleague is quick to point out that the deck is thoroughly stacked against women. 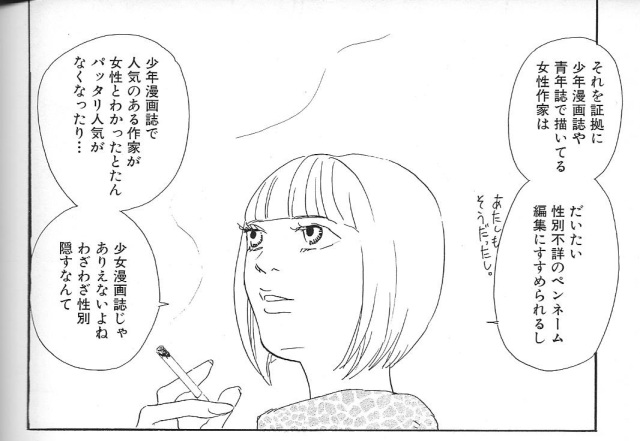 Female Seinen Artist: For female artists trying to break into drawing for a seinen or shōnen magazine, / it’s generally suggested that they choose a gender ambiguous pen name.  (They said I should too) / If a popular artist for a shōnen magazine were known to be a woman, suddenly she wouldn’t be so popular… / There’s no way she’d work for a shōjo magazine, so she hides her gender

The third male artist present is quick to run after Tawara as she leaves.  He wants it to be known (and perhaps Matsuda wants this as well) that the stereotype of men and boys not reading shōjo manga does not always hold.  He talks about some of his favorite female artists and hopes to read some of Tawara’s work sometime.  There is likely no end of keyboard warriors ready to point out that he’s probably just “white knighting,” as they say, angling to align himself with her so that she’ll take a sexual interest in her, but I’d like to believe that the sentiment is genuine.

The phenomenon of female artists/writers hiding their gender is not limited to Japan nor is it limited to comics.  For some time now it has been common for female writers of what in my day was called juvenile fiction but is now apparently YA to conceal their gender.  This is why Elaine Lobl Konigsberg is known as E.L. Konigsberg and Joanne Rowling as J.K. Rowling.  Sure, you might now know that Rowling is a woman, due in no small part to the incredible popularity of her books and the movies they spawned, but I would add that when it was revealed recently that she had been writing detective fiction under a pseudonym, the name she used was a man’s.

Can’t a Girl Get a Break!

So far, you wouldn’t be remiss in thinking that I’ve only answered the question of who writes shōjo manga rather than who reads it.  These questions, I think, ought not be separated.  If women artists writing stories “for boys” are actively concealing the existence of their lady parts, then those boys are never given the opportunity to realize that they might like something written/drawn by a woman, thereby reducing the likelihood they might seek out work by other women, potentially outside the rigid, meaningless domain of “by dudes, for dudes.”  This is not a new point; feminists have been saying for years that patriarchy is harmful because it enforces unreasonable gender expectations for both men and women. 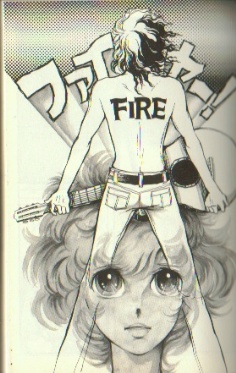 I have nothing particular invested in my masculinity.  While living in Japan, I would regularly describe myself as a “homemaker” (shufu), if only to avoid the lengthy explanation of what a graduate student at an American university might be doing in the middle of Aichi-ken.  As the potential “white knight” above shows, there’s no reason to assume that male readers wouldn’t take to shōjo manga, and the reason for this is that shōjo manga, despite regularly being pigeonholed, is not any one particular thing, whether it’s Ikeda’s period dramas like Rose of Versailles and Window of Orpheus, Hagio Moto’s SF interrogations of the human condition like A, A´ and Star Red, Obana Miho’s hilarious and often arresting Kodomo no omocha, or Mizuno Hideko’s groundbreaking tale of adolescent rebellion, Fire!  I would never claim to be a shōjo manga fanatic, but neither do I find common cause with the ignorant douchebags.

The real tragedy of limiting shōjo manga to its hypothesized demographic is that it will continue to be read, over and over again, in the same way, as a reflection of the aspirations of young girls or, more cynically, of their behavior as capitalist consumers, which is to say representations of girls will become what girls are supposed to be and, by extension, what boys are not supposed to be.  The more readers conform to these representations as expectations, the more editors are emboldened to make these gender patterns ever more rigid, regardless of whether it was men writing for girls, as in the immediate postwar period, or women seizing control and creating stories for each other.  While it is admirable that women artists have taken control of media marketed to them, Tawara’s seinen artist friend above provides a necessary word of caution, that shōjo manga has been ghettoized as a result.

It’s high time, I think, that male manga readers proudly proclaim their “femmy” interests–and don’t even act like there isn’t a rampant plague of shouting down female geeks as being somehow disingenuous in their fandom.  The only way things will change is if men and boys give up the ultimately stifling prerogatives of their masculinity.