I can imagine how over the past few [dozen] weeks, you, dear reader, have come to be more than a little irritated with my raving about how everyone is wrong and I am so right, people should just listen to me, and other egomaniacal claptrap.  I’ve expressed my displeasure on several occasions with how critics and non-critics alike approach manga history, and how their assumption of a comprehensive purview has the unfortunate result of minimizing artists and moments that are otherwise quite interesting.  This minimization is not unique to manga, of course, nor even to historiography.  I recall sitting in the audience of a highly touted lecture at ICAF in which the speaker more or less conflated comics readers with those who participate in the trappings of fan culture.  Not that I have anything against fandom, but if you can’t see why that is problematic, then perhaps we have nothing to say to each other.

That said, I thought it might be a refreshing change of pace to look at something being done “right”–or at least not so wrong.  With that in mind I’d like to take a close look at Yoshizaki Seimu’s Kingyoya koshoten (Kingyo Used Books) and how it treats a manga past (and present) not as an object of historical or sociological or literary (Be still my heart!) analysis but as something seamless with our lives.  In doing so, it presents a historical purview that is no less rigorous yet avoids the pitfalls that narratives composed of periods, geniuses, influence, and so forth regularly fall into.

To any who know me, my politics are pretty obvious, and you can likely guess from the occasional soapbox that I have stepped onto that neo-liberal capitalism and I are not the best of friends–nor are we the worst of enemies.  Nevertheless, the recent expansion of the surveillance state, an irrationally persistent belief in economic austerity in hard times, and the prevalent sense of “who gives a shit” in the face of political suppression in the aftermath of the Occupy movement’s “failure” have made me sick to my stomach.  Despair seems to be the order of the day for those who dare to follow the old imperative of the Delphic oracle.

What does this have to do with manga?  I have seen Kingyo Used Books (hereafter KUB) described as a “slice of life” manga, the common designation used to mean “not recognizable as a codified genre.”  Anytime a comic is about people, this “slice of life” moniker seems to crop up, yet it doesn’t really reveal much.  KUB, if it’s “about” anything, centers on a used bookstore owned by a man named Kaburagi Seitarō (who looks more than a little like Beard Papa) but operated and managed by his granddaughter Natsuki, while he and her cousin roam around Japan looking for rare and unusual manga (their travels are recounted in an omake series that appears in the collected tankōbon volumes).  That said, while the eponymous used bookstore (which, in fact, only sells manga) serves as the locus for what happens in the comic, its narrative weaves in and out of people’s lives as the bookstore and manga in general act as catalysts for them coming to grips with themselves and the people around them.  Manga as a social phenomenon, though it lies at the heart of the series, is not so much an object of study–though there is a “study guide” in each volume describing various manga referred to in the course of the narrative–as it is a flashpoint or focus upon which characters, otherwise adrift in their lives, discover a renewed sense of purpose or comfort in their own skins.  This may at times come off as sentimental and hokey, but, as Heidegger certainly thought, the way in which modern academic history writing, politically and sociologically obsessed as it is, regularly thumbs its nose at the varied sentiments of individual persons has been much to its discredit. 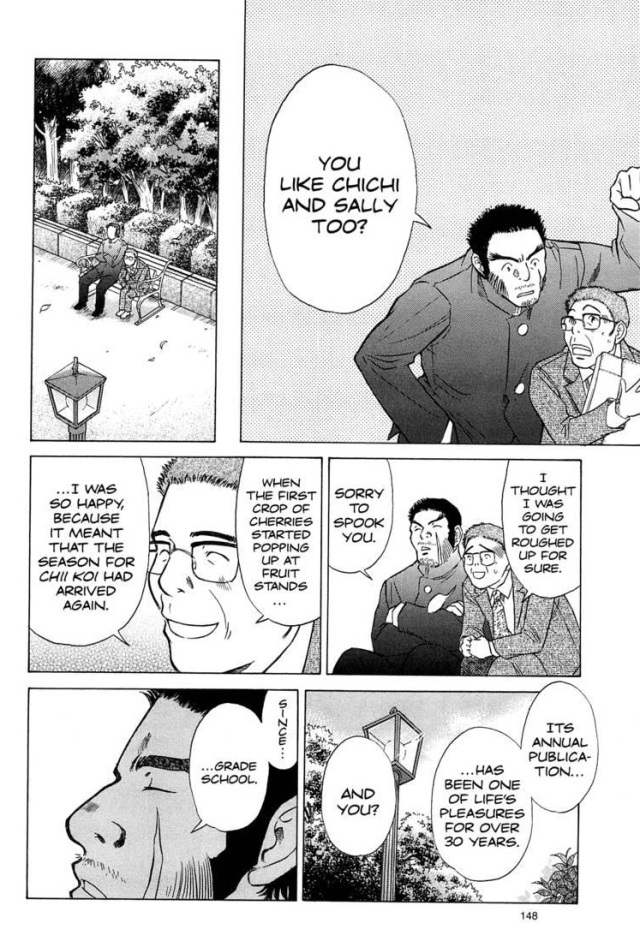 “One Percent Man” (ch. 13) tells the story of Ikaruga, a high school tough guy (yankii) along the lines of those in Morimoto Kozueko’s Gokusen, who feels the need to maintain the image of his school/gang so that they will not be ashamed in the face of rival schools.  Yoshizaki sets you up to understand Ikaruga in this way, because what the story is really about is his love of Mitsuhashi Chikako’s long running family-oriented manga, Chiisa na koi no monogatari  (A Little Love Story), which recounts the innocent young love of Chichi and Sally.  It is basically the last thing a brute with a reputation to uphold should have on his mind, but when Ikaruga sees a young boy playing with koinobori, he is reminded that it’s already May and a new volume should be appearing soon.  It is a reminder both to Ikaruga and to a reader of KUB that there is more to him than the overly simplistic caricature of the “tough guy.”  This point is made rather explicit in the study guide for this chapter, where Hashimoto Hiroshi exhorts the reader to “take a cue from Ikaruga-kun by abandoning your biases and expand your boundaries to include all kinds of manga.”

Chii koi (as it’s often called) becomes the catalyst for two men, who in the “real world” would have little to do with each other, to form a close bond, so close that when Ikaruga is assaulted by a “man’s man” from a rival school who wants to test his mettle, it’s the old salaryman who steps in to defend him. 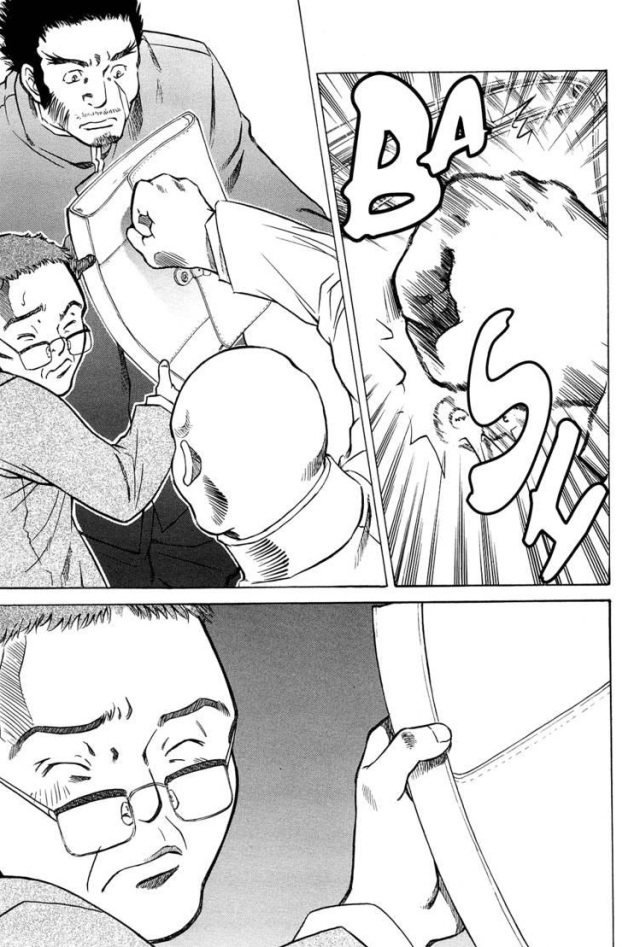 A recurring point in the series is that there is no shame in being who you are, even if that contradicts an image you’ve built up of yourself over time.  This may seem like a lot of easy self-esteem-speak, but I recall quite clearly a colleague of my spouse, when she taught at a high school in Japan, and his deep shame at having it revealed that he was an avid reader of One Piece, simply because it was “for boys” and not the kind of thing an English teacher of good standing at a well-respected high school should be spending his time on.

A Land Without Manga

What I find most interesting about KUB, though, is how the “sentimental” approach to a manga past works both positively and negatively, or rather there is a fundamental ambivalence that runs throughout the text.  Whether it’s a casual reader falling in love with a “certified manga freak” and feeling they have no common language, because he simply doesn’t know as much about comics as she does (ch. 24), or the young celebrity who is portrayed as an avid manga reader purely for marketing purposes (and who, as it turns out, couldn’t care less about manga – ch. 30), KUB doesn’t present manga fandom as a cure-all for life’s troubles.

No where is this more apparent than in the recurring episodes featuring Seitarō’s son and Natsuki’s father, Ichirō.  Having grown up working in his father’s bookstore, Ichirō feels like he has been smothered by manga, so it is rather odd that his first appearance in KUB sees him carrying a comic, Jean Giraud’s Blueberry, into the store he fled and where his daughter now works.

At first “Land Without Manga” (ch. 5)  seems to be a tale of redemption: Ichirō travels to France as part of his first job trying to secure contracts for translations into Japanese.  He muses to himself that if there are manga in France, they’re likely only cartoons, caricatures, and what not, and it is at that moment that he discovers the long tradition of the b.d. album, and Blueberry in particular.  The moral seems to be that no matter where Ichirō goes, he cannot truly escape manga, and his continuing appreciation for Giraud’s work seems to be a sign of his coming back to who he was/is.

Of course, if you stopped there, you might get this impression, but in the second installment of “Land Without Manga” (ch. 31), Shiba, the Kingyoya boarder and human manga encyclopedia, goes to work for Ichirō’s publishing company in a naive attempt to impress him and get him to approve of marrying his daughter.  What Shiba discovers working there is that not only does Ichirō refuse to publish manga of any kind, as we learn in an earlier chapter (26) against his board’s objections, but he even cuts out and discards the comic strips that appear in the newspapers and magazines left around the office.  In ch. 31, this is the premise for a story about how the janitorial staff collect these strips and keep them hidden in a library of binders that the employees regularly read on their breaks. 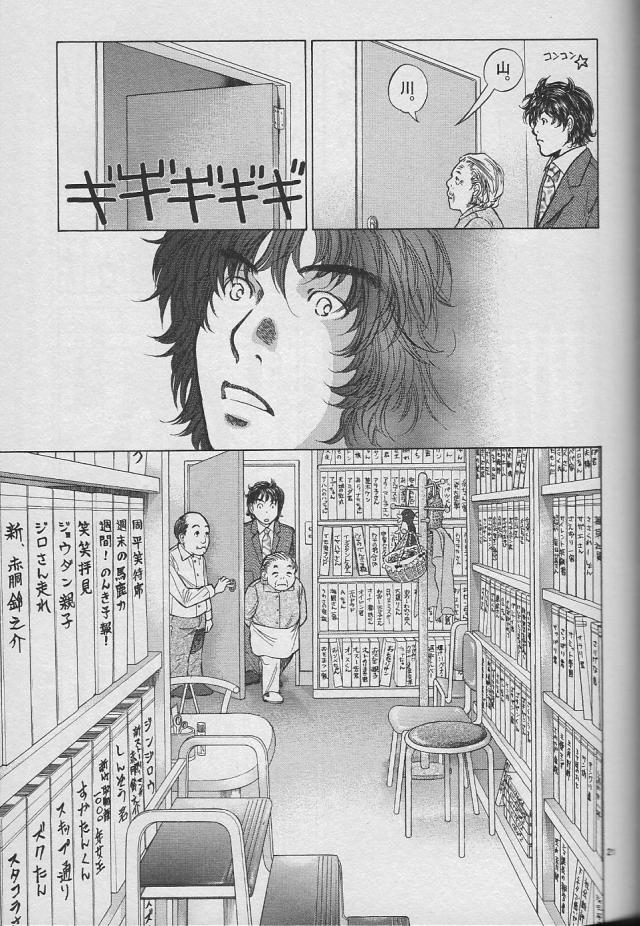 The unspoken subtext of all this frivolity, though, is that Ichirō, failing to find his manga no nai kuni somewhere out in the world, has created it within the cloistered bubble of the company he runs.

There is no easy resolution for those who feel beleaguered by manga, and it is to KUB‘s credit that it doesn’t try to reduce the darker side of their experiences with manga to simple caricatures of redemption and salvation by nostalgia.  When Shiba goes to see Sasayama (the not-pretty above) about what ails him, he makes every effort, despite being one of the “beautiful people,” to see things from his perspective and try not to demean it.

If KUB is often hokey and sentimental, it is because it attempts to present the value in being brazenly and passionately partisan (both for and against) as opposed to being coldly neutral and objective.  There is value in presenting multiple, interweaving and often contradictory perspectives on the thing you love without trying to co-opt them by dialectically resolving them.  If anything, KUB takes the implicit stance that there is no proper point of entry into manga–in fact coming into manga may be a misnomer.  It is something already in and of your life, which cannot and ought not be overly predetermined by some arbitrary conceptual schema.  If that’s hokey and sentimental, then call me an unrepentant sap.

Next week: who reads [shōjo] manga?